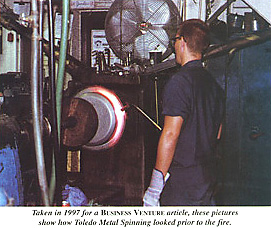 Toledo Metal Spinning Company, back in full production after being devastated by a fire in early 1998, is one of six companies recognized with a Blue Chip Enterprise Initiative Award. The company was selected for the honor which “recognizes small businesses that have demonstrated the ability to withstand the cyclical nature of business, overcome adversity, seize opportunities and succeed.”

“Our company has been through total chaos over the last year, and we have made a miraculous recovery,” said Eric Fankhauser, Toledo Metal Spinning Company vice president.

The award was presented at the U.S. Chamber of Commerce annual meeting in Washington, D.C.

A fire, fanned by nighttime winds, destroyed 95 percent of the firm’s manufacturing equipment and 80 percent of its manufacturing space on February 4, 1998. After an investigation, the cause was deemed unknown by both the insurance company and the city fire investigators.

The loss exceeded $10 million. More than 70 years of tooling and job development, quality inspection gauges, several new pieces of equipment, and many records, files, and history were annihilated by the fire.

“Within the first 24 hours of the fire, our management established two priorities in order to survive this catastrophe,” Fankhauser said. “The number one priority was to keep our customers informed and in business at whatever cost. The second, to retain our employee base. I cannot overemphasize how important employee retention was. Our business is very skill oriented. It took many, many years to train our existing employee base. A good percentage of employees are second- and third-generation workers. It was imperative in order to continue the business that each and every employee was involved in the rebuilding process.

Despite the devastating fire, company sales by the end of 1998 had reached 83 percent of 1997 levels, with full recovery anticipated for 1999. “Through our crisis came the opportunity to rebuild Toledo Metal Spinning as one of the country’s most advanced, state-of-the-art facilities of its kind,” said Fankhauser. “Today, we have some of the most sophisticated equipment on the market, ready to propel us into the 21st Century with a great deal of efficiency.”